AFS Chairman at the 2nd Middle East & Africa FinTech Forum: Financial disruption is a catalyst for change and an opportunity

AFS Chairman at the 2nd Middle East & Africa FinTech Forum: Financial disruption is a catalyst for change and an opportunity

In his opening address at the 2nd Middle East and Africa FinTech Forum, entitled Beyond Disruption, held in Bahrain today, Mr. Al Waary illustrated the elemental shift in the way financial services industry is now responding towards FinTech. “Banks have shifted their mind-set and are viewing FinTech as an opportunity rather than a threat. More and more banks are embracing FinTech and are catching up very quickly,” he said.

Mr. Al Waary added that many traditional or legacy banks are still responding with a defensive strategy by creating “mobile only” banks or “app only” banks, leveraging their existing infrastructure and regulatory status to enhance the customer experience and attracting new customer segment.

On a related front, he explained that central banks around the world are getting increasingly supportive of FinTech innovation and are establishing regulatory ‘Sandboxes’ to enable firms to test new financial products with real customers.

“Almost US$100 billion has been invested in FinTech globally since 2010. In 2017 alone US$ 27.4 billion was invested, an 18% increase from 2016, driven by the surge in USA, UK and India,” said Mr. Al Waary, highlighting the rapid increase in financial services startups in MENA and leveraging technologies and innovation to tap in the un-banked, underserved and unsatisfied customers.

Mr. Al Waary predicted a number of key developments in the industry in 2018; one of them is that greater governmental support to promote FinTech innovation will be generated. “Many governments will encourage conventional banks to take a more active role in utilising “FinTech sandboxes.”

He also noted that going ahead, customers will set the agenda to shape the future of banking, reiterating Bill Gates’ words – “We need banking but we do not need banks.” In addition, he foresees an explosion of frictionless payments in the region, as initiated by AFS and Batelco’s bWallet service in Bahrain. Such wallets will soon be launched in Oman and Libya.

“While all of this is happening, Artificial Intelligence (AI) will find application in almost all areas of banking, from front-office, to credit scoring to even advisory… and cloud banking will bring more scalability and agility at a lower cost,” said Mr. Al Waary. He predicts that Blockchain technology will soon become mainstream, revolutionising banking operations, and financial inclusion for the two billion unbanked people around the world.

Mr. Al Waary concluded by emphasising on the need for collaboration between banks and FinTech start-ups, which would combine capital and innovation, economies of scale and agility, customer data and customer experience, regulatory and technical know-how. “I have always believed that disruption is a catalyst of change and opportunity…. at AFS we are optimistic about what lies ahead,” he said. 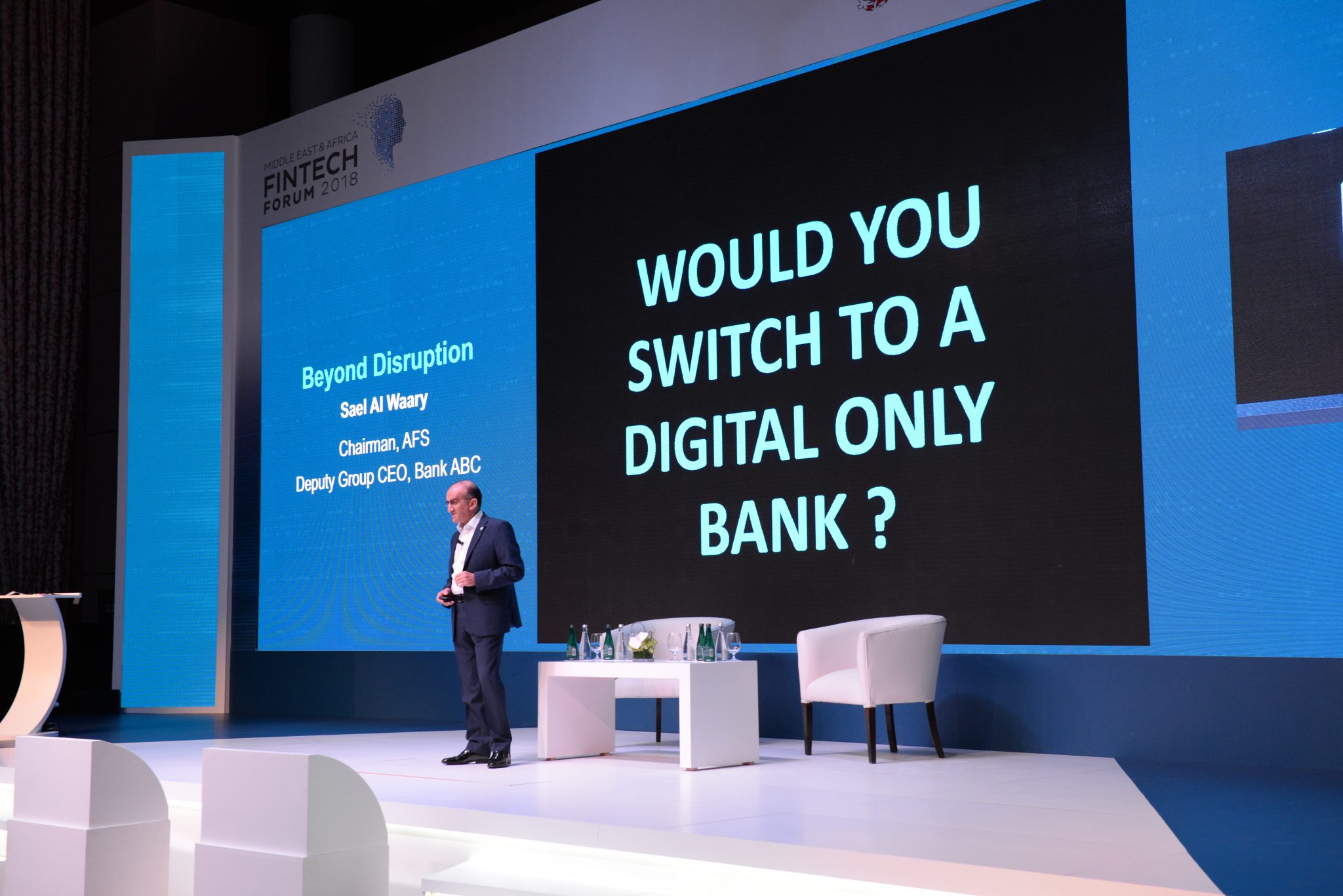 The largest FinTech Forum in the Middle East and Africa held in Manama, gathering the world’s top FinTech and Artificial Intelligence expert